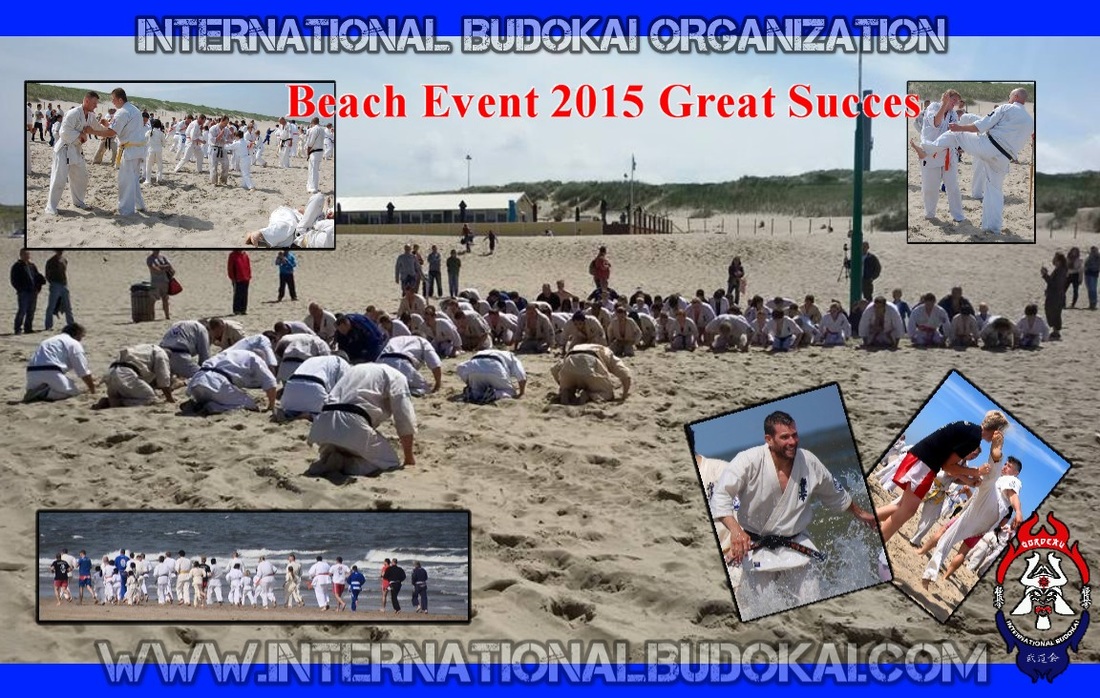 ﻿NEXT WEEK IN THE NETHERLANDS INTERNATIONAL BUDOKAI EVENT﻿ 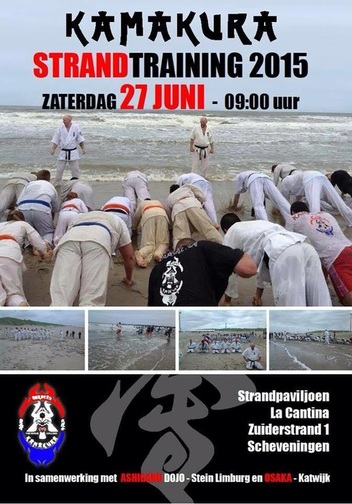 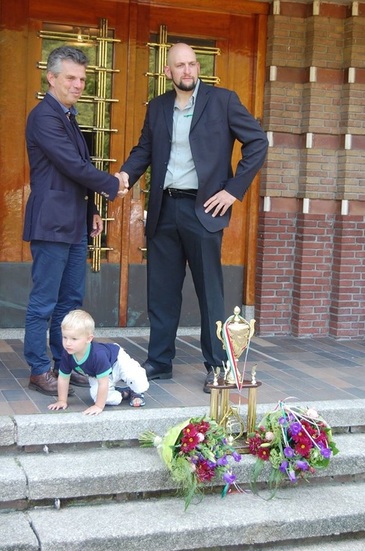 Fighter Cem Senol was honored by his hometown for his sporting achievements to this day by councilman Drs.W.Van Duijn at Katwijk Netherlands. Dojo Osaka and Sempai Senol are the first martial artists Dojo and person to be honored in this city / town. Osu
International Budokai Camp Italia
International Budokai Kancho Gerard Gordeau on TV 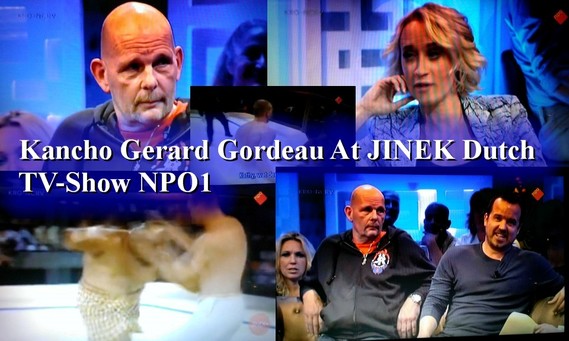 Kancho Gerard Gordeau and author Jonathan Gottschall were on the ninth of June a guest in the TV program Jinek. The meeting and the interview went on a book that has been written about Gottshall combat sports and his idol Gerard Gordeau. After the broadcast Kancho handed an honorary membership certificate on behalf of the International Budokai to Jonathan. Click to see the pictures for broadcast. Also see MEDIA on this website.
International Budokai Kyokushin Delft Dojo Netherlands 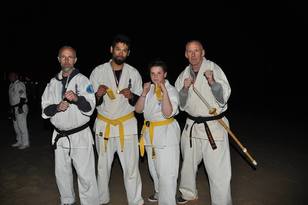 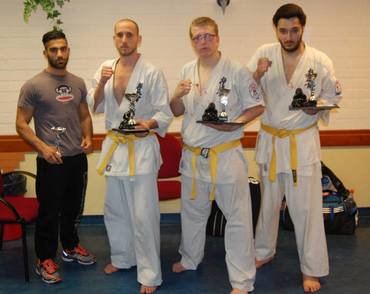 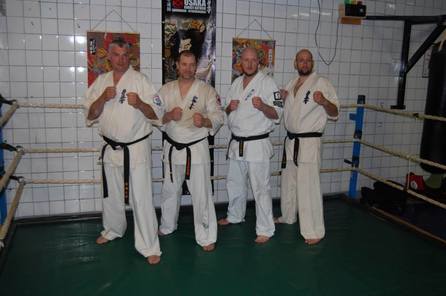 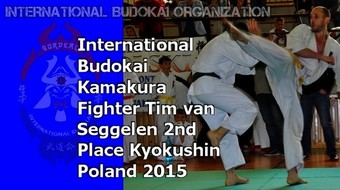 Coach Sempai Frank Van Eijndhoven, Osu
There is NO International Budokai, Kamakura or Gerard Gordeau account on TWITTER. If you see one? Its not official or approved by us. Osu 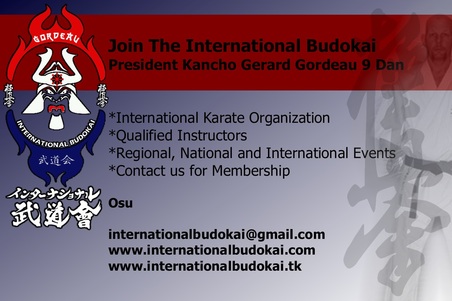 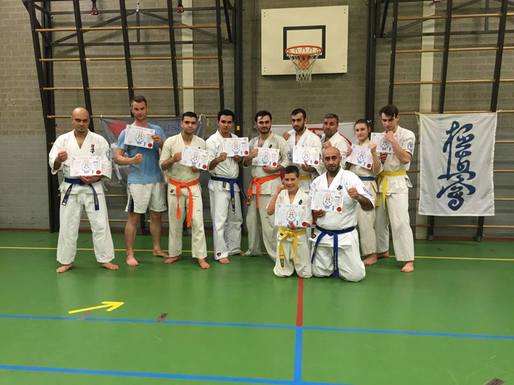 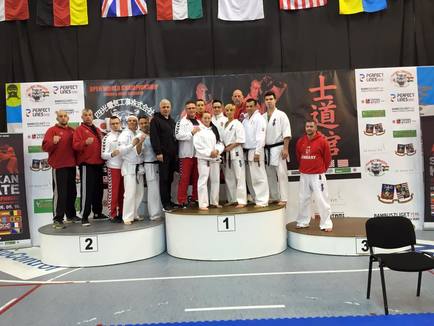 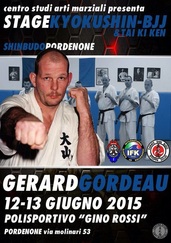 Download File
On Saturday, May 16 at the municipal sports hall in Wysokie Mazowieckie was Cup held by Polish Federation of IBK (Kyokushin Karate), organized by Mazowiecko Podlaski Karate Club with Shihan Arthur Więzowski. At the forefront of the organizing committee were also Sensei Wojciech Zagdański and Zbigniew Dabrowski.

Polish Cup took place thanks to the support of the Marshal Office in Podlasie Province and Mayor of Wysokie Mazowieckie. The ceremonial opening of the Polish Cup was by the Province Governor Andrzej Meyer and Marshal Jerzy Leszczynski.

Polish Cup brought together 150 players with Polish and Podlasie Region and also from the Netherlands. Fighters competed in different weight classes and age groups. The youngest participants could measure their strength in the category of mini MMA- fight with bringing an opponent to the ground.

Most emotions aroused fighting in the formula K1 kickboxing. No less excitement was accompanied by struggles early with full protection helmets and other protectors used for the safety of participants. Competitions were held in a good atmosphere of competitive sports, all medalists received great cups and diplomas.

The youngest participants had the honor to receive their trophies won from the hands of the Governor and the Marshal. 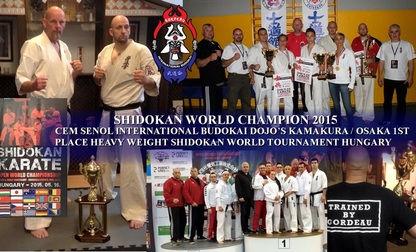 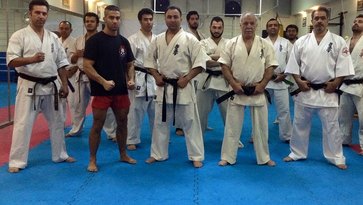 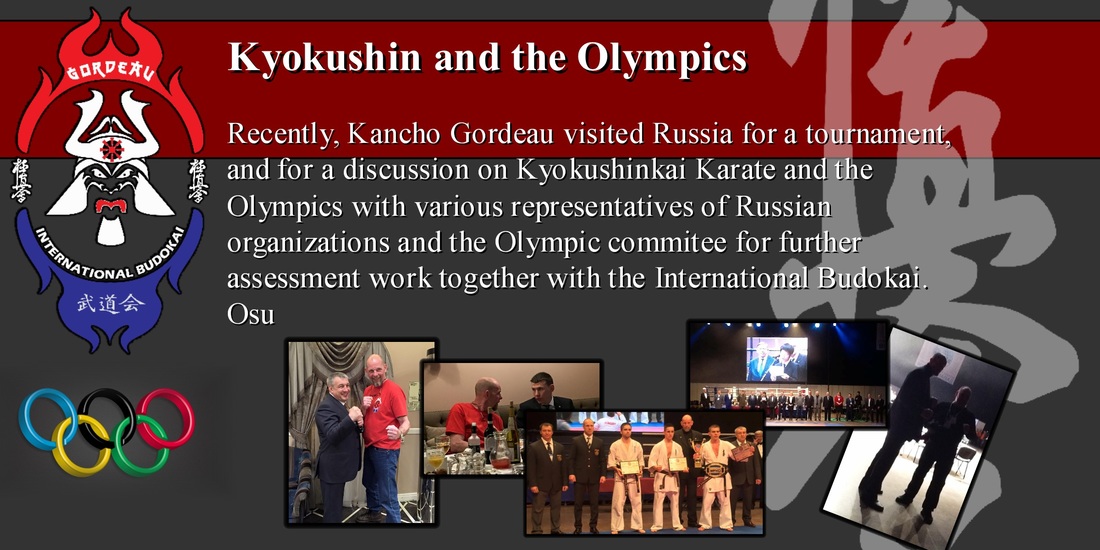 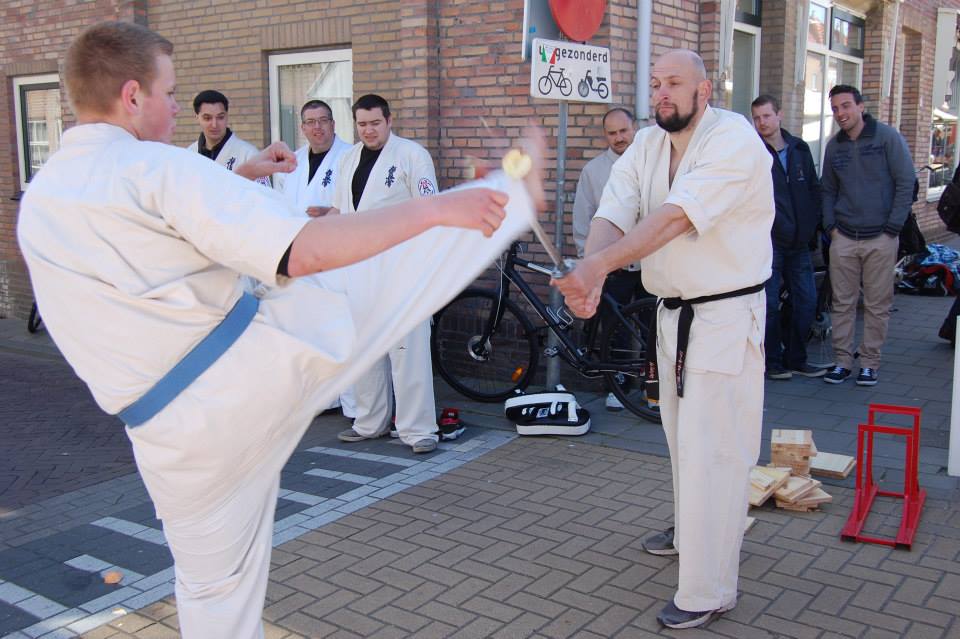 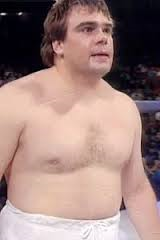 One of the first men to ever step into the UFC Octagon died this week, according to multiple reports. Kevin Rosier, who took part in the UFC 1 tournament in 1993, was ill for quite some time and suffered an apparent fatal heart attack Tuesday morning, UFC co-founder Art Davie confirmed with MMAFighting.com. Rosier was 53 years old. Rosier won the second aired fight in UFC history, defeating Zane Frazier via TKO by way of head stomps on Nov. 12, 1993 in Denver, Colo. He went on to lose to Gerard Gordeau by TKO in the semifinals of the tournament. Before embarking on an MMA career, Rosier was a multiple-time kickboxing champion. Rosier, an upstate New York native and Florida resident, also competed at UFC 4 in 1994, falling to Joe Charles. He lost twice in his MMA career to Dan Severn and had a 2-6 record when he retired in 2000. Rosier most recently living in a retirement community in Tennessee, according to a 2013 story from Nashville Scene. He had open-heart surgery and fell while already in intensive care in recent years. Rosier spent most of the last decade in and out of VA hospitals. "I'm lucky to be alive," Rosier told the magazine at the time. Davie said Rosier always struggled with his weight and when he was booked for UFC 1 he was around 325 pounds -- about 80 pounds more than what he originally claimed. However, Rosier won an upset over Frazier in the quarterfinals of the tournament and it was one of the highlights of his career. "He was the hailest and happiest guy at the [UFC 1 after] party," Davie said. "He was so proud that he had won that first bout." Davie, whose 2014 book "Is this Legal?" chronicled UFC 1 and how the organization was built, said Rosier was incredibly confident heading into the first UFC, even when Davie caught him naked in bed with a woman a few days out. "I asked him, 'Kevin, are you going to be f*cking ready?'" Davie said. "He says to me, 'Arturo, when I come in that right hand is going to settle this whole thing. I'm going to show you.' He was in indefatigable. You couldn't seem to put him down emotionally. He seemed to be very buoyant that week." Davie painted Rosier as a ladies man, who stayed with an ex-wife in Colorado during part of fight week, but always had other girlfriends showing up. Rosier also had a root canal the week of the fight and was on a diet of white rice, hot sauce and Snickers bars washed down with Dr. Pepper, according to Davie. But what Davie recalls most about Rosier was not his eccentricities, but his kindness and ability to get along with everyone. "That's my memory of Kevin -- a big, lovable lug who had a heart as big as he was," Davie said.
International Budokai Hanshi Nico Gordeau goes Belgium 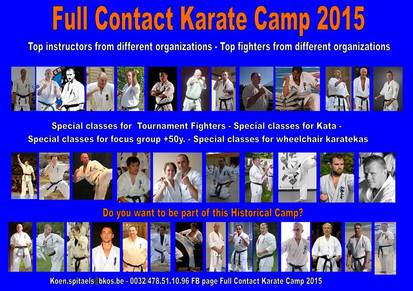 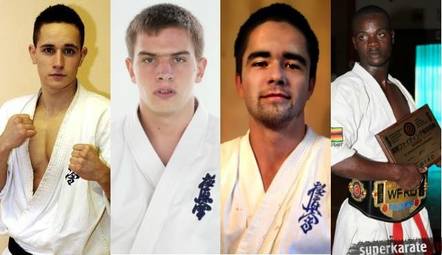 April 24th in St Petersburg, Russia 4 Man -85kg WFKO Grand Prix Tournament featuring Zsolt Zsiga (Hungary), Artem Nazaretyan (Russia), Sergi Gerasimov (Russia) and Tangai Mlangu (Zimbabwe). With the winner invites to fight for the WFKO Title and Belt along with qualifiying for the 1st WFKO World Cup.
INFO SUMMERCAMP HUNGARY CLICK HERE OSU
Osu International Budokai Members, DO NOT make own International Budokai Logo's and posters etc. The Organization makes them and we give them by our media to you. We must obtain our structure. Osu
International Budokai Kancho Gordeau Seminar Seiken Dojo Hungary 2015 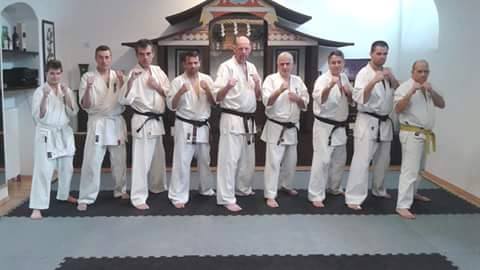 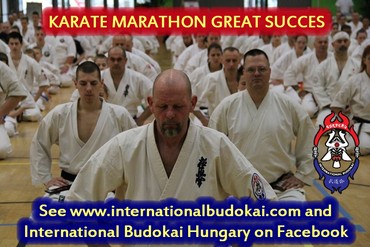 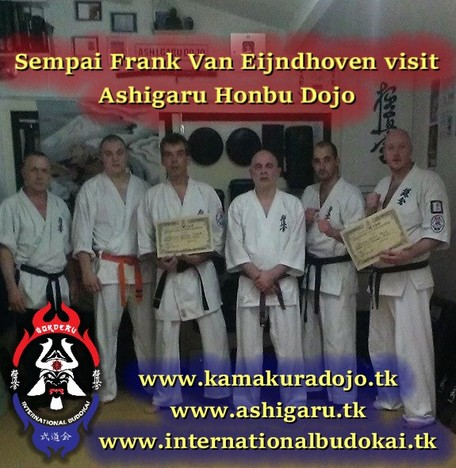 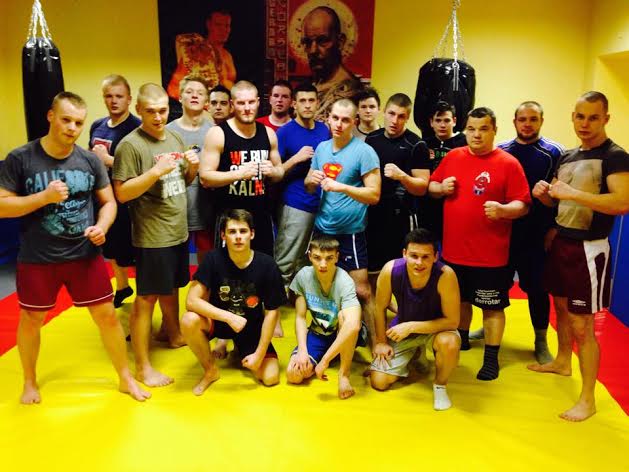 I want to inform you that we have a lot of programs for this year. We start the year with seminars and common trainings to prepare for the competitions. In february we will participate in a competition in Sátoraljaujhely in kata ,kumite A,B,C and Children and juniors. End of february will be the Hungarian championship with all organizations.
March 15 we organize the team to The Hague at the Open European championship. March 28 will be the karate marathon. About the summer camp (2nd weekend of july) we suggest the same terms like last year but with more countries and with more karateka. Osu Pál Németh
OSAKA CUP 2015 Great Succes

On Saturday the 29th of November, Dojo Katsu held her Full Contact Karate tournament for the 15th time. It is a matchmaking event hosted by the International Budokai but open for al styles that want to participate. It was an successful evening with good fights and a good atmosphere. The International Budokai schools that where attending the event were: Dojo Katsu and Dojo Osaka. Both schools had made good impressions with their fighters and their level of expertise. 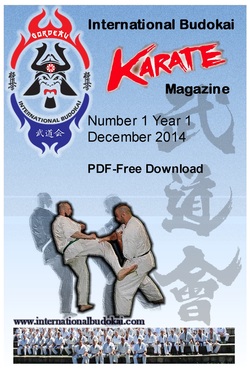 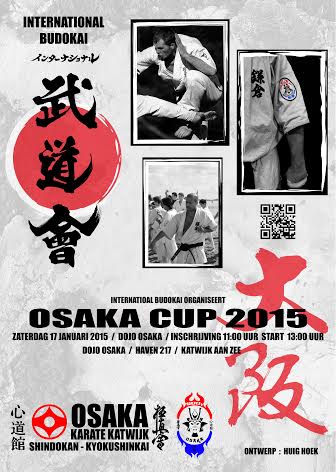 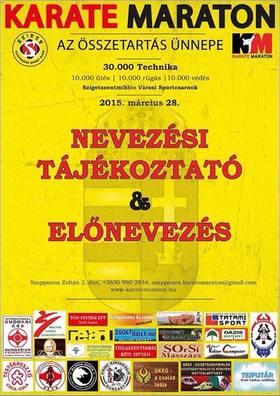 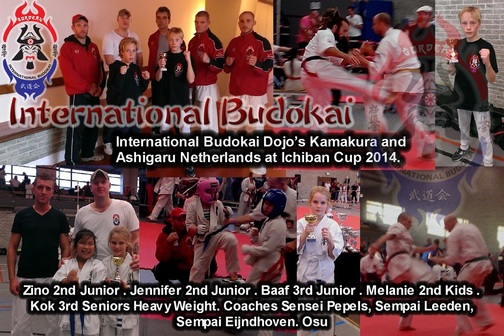 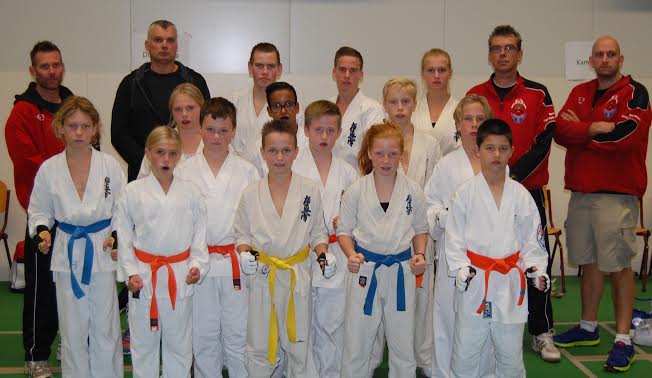